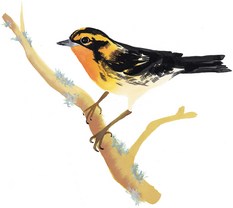 In 1965 Phoebe Snetsinger was 34 and her life was half over. She was married and had four small children and was living in a little three bedroom, one bath house in rural Minnesota.

On a spring day she went to visit her friend Elizabeth. She handed Phoebe a pair of binoculars and pointed toward an oak tree in the back yard. What Phoebe saw was a small black and white bird with a yellow head and an orange breast.

Later in her journal she wrote that it was like a “blinding white light.” It was the beginning of an amazing journey.Â Numb and bored with her role as a housewife, Phoebe turned to bird-watching with a passion.

But then her life took another dramatic turn. At 49 she was told she had cancer and less than a year to live. Her response was to throw herself even more into birding, in a quest to see how many birds she could see before she died. But she did not die.

She was obsessed with getting the most number of birds on her “life list.” By the time she died in an accident on a birding trip in Madagascar she had seen almost 8,400 birds, almost 85% of the known species in the world and more than anyone else had ever seen.